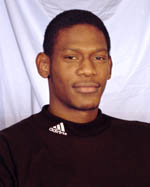 Cuthbert Victor was one of Racer basketball's more versatile stars. Though standing only 6-foot-5, he was a tenacious rebounder, solid defender and dependable scorer. When he left Murray State, he had scored 1,485 points and grabbed 935 rebounds, a combination eclipsed by only a handful of Racers all-time, and none of those matched his .589 career field goal percentage. Besides being ranked among MSU's all-time leaders in scoring (14th), rebounding (sixth), and field goal percentage (third), he is the Racers' career leader in blocks (160) and stands fifth in steals (167). During his four seasons, Murray State advanced twice to the NCAA Tournament, where he was the Racers' leading scorer both times. Twice he was named All-Ohio Valley Conference, and was the league's player of the year as a senior. Below is a feature story written by Will Aubrey of the Racer Insider during Victor's senior season at MSU. -- TT

By Will Aubrey
Racer Insider

The Destroyer novels tell the story of Remo and Chiun, two assassins employed by the American government. They are able to pass unseen through enemy defenses and complete their mission before the adversary knows what's happening. If need be, they dodge bullets in the process.
In much the same way Cuthbert Victor lurks, unnoticed on the floor until, out of nowhere, he rises into the air and rattles home a thunderous dunk. If need be, he'll dodge a couple of defenders in the process. You can watch a game and not notice him, then look up and see that he has 16 points and 10 rebounds. He may be the quietest impact player in the history of Racer basketball.
This year, Victor is putting up near-ridiculous numbers, 17 points and 11 rebounds per game while shooting 69 percent from the field and 44 percent from beyond the arc. He is second in the nation in rebounding and fourth in field goal percentage. Through five weeks of the season, Victor has been the Ohio Valley Conference player of the week three times. Against Western Kentucky he had 26 points and 20 rebounds. And yet, he remains as quiet and unassuming as ever.
When asked if he might be the player of the year in the OVC he said: "I'm just trying to win. My teammates help me out a lot, and I try to come through for them."
MSU head coach Mick Cronin wasn't so reticent. "How about in the nation," he exclaimed. "The coach's opinion is that he is the player of the year. But the Player of the Year award usually goes to the best player on the best team. So our team success will determine end of the year awards."
Still, Victor demurs. Despite being among the national leaders in shooting percentage he says he isn't a great shooter, just a good finisher. Well, no one can deny that he's a good finisher. But you have to also have a sweet stroke to hit 44 percent of your 3-point attempts.
Where does he rank among Murray State's all-time greats?
Well, at the end of the year there's a good chance that he will be one of only three MSU players in the top 10 in both scoring and rebounding. He could easily be the all-time leader in field goal percentage. And this season, if his attempts increase just a bit, he could challenge the single-season record for 3-point percentage. That last one is a stretch because Victor has never shot the three this well before. But what if he does it? Add that to all of his other marks and he'd have to be among the best ever.
"Cuffy is as good on the grab and putback as I have ever seen," longtime MSU radio announcer Neal Bradley declared. "Although he is undersized for his position, he plays with heart and a will to win, reminiscent of Vincent Rainey, who also got the most out of his size. As far as heart goes, he takes a backseat to no one. "I don't recall the game, but a couple of seasons ago at the RSEC, an opponent was running a fast break and Cuffy was on the wing when an opposing player tried a bounce pass to the corner. He pinned the ball to the floor, picked it up and triggered a fast break, finishing at the other end. Amazing. It was one of the best plays I have ever seen by anybody at any level."